Banned From AdSense? Now What?

Has your Google AdSense account been disabled or temporarily banned?

Is this the end of your blogging career?

We know many people who have been “banned from AdSense” and whose Google AdSense Account have been disabled for no good reason. Of course, most of them have been in the learning process of their career.

They must have either clicked on their own ads without having any knowledge that this is a complete NO NO!

Of course, there were other reasons such as their friends clicking on their ads for them returning that favor. Google must have noticed a pattern and kaboom – they have been zilched!

There are also others whom we know are completely lost on as to what to do next. This is mainly because their entire online income revolves only around Google AdSense, without any backup plan. 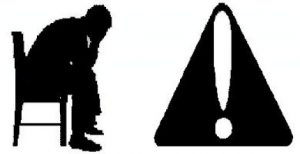 Our advice is to not make Google AdSense your only choice. It can really pull the rug of from your chair.  So always have a backup plan.

We are sure that you must have also encountered people who complain about having their Google Account disabled for no good reason. There are cases when the publisher may have been unfairly terminated.

However, there is also reason to believe that most account terminations are in fact done for valid reasons.

We still believe Google AdSense is a great product that has made many people millionaires. In fact, Google AdSense might be the easiest way to “make money blogging”.

Now a little information for those who came in late… 🙂

First, you sign-up with Google AdSense to use their PPC service. Next, upon approval, you have the option to choose the style of online ads, that could be placed on your blog. You get paid when each time a visitor clicks these ads. You also get paid whenever your page containing the AdSense ad is loaded (through impressions). After you make $100, Google sends you a check.

Read our post on how to make money with Google AdSense, to give you an insight into the whole gig.

Now, one of the darkest nightmares for anyone who is using Google Adhttps://aaronshara.com/make-money-with-google-adsense/Sense (and which generates hundred percent of their online income), is to receive a notice from Google stating that they have been banned from AdSense.

Generally, the email or notice starts out like this…… 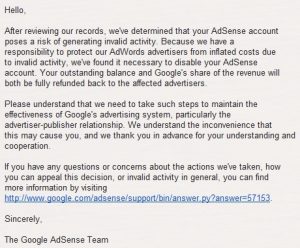 Now, if you have been banned by AdSense, what are the chances  that it would be reinstated?

Have you ever heard of anyone whose accounts have been reinstated, after they have been banned from AdSense. Did they receive their money after their banned account has been re-instated?

Very FEW and they rare cases or very special cases.

It is understandable that Google is very strict when it comes to click fraud. People who click on their own online ads aren't stealing from Google, they're stealing from the advertiser who has placed these AdWords Ads with Google. So, it is not surprising that Google is protecting their advertisers’ interests.

Most advertisers target sites which are new and which have great growth potential to place their ads. Generally, most of the newbies are not aware of this and the advertisers make a killing through AdWords. But, once they realize their plans are not going according to schedule, they report (or fix) the site and generally it gets banned.

This is one grey area that Google is not able to fathom. Mainly because, they value their advertisers over their poor AdSense cousins.  ha ha…

Not only is the account banned by AdSense, but, the existing click-through earnings are refunded back to the advertisers.

It is better to forget about the whole incident.

Mainly because, it is highly unlikely that Google will unlock your AdSense account again, Of course sometimes if you have a genuine and a fantastic reason (which of course is a rarity). We only know about two or three such cases.

So, try not to waste your time running after them with reasons as to why such activity was noticed in your site.

ALSO remember, anyone with bad intentions can fix your site.

Besides, it is the Internet age and everything is automated and Google's response to any sincere and arguing emails from your side would be useless. This is mainly because the answers are completely robotized. Just like R2D2 in the movie Star Wars.

Google AdSense Will not Ban Your Accounts from Now On!

However, there are some posts making the  rounds that “Google AdSense will not ban your accounts from now on” as there is a change in their TOC (terms of conditions).

However, there has been some news about Google not banning their AdSense account, making the rounds recently. We cannot vouch whether this is true or not, as we have not come across anyone whose accounts that have been reinstated. But, of course, there may be exceptions.

If this is true, finally after decades of waiting, Google has showed some mercy in their AdSense terms of conditions (YAY)! There has been information circulating in the net that Google has made changes to the AdSense banned publishers accounts. Apparently, we are given to believe that they have also improved the appeal process for AdSense accounts.

However, most of the people we know  who have been banned, are still banned. However, a few of them got a reprieve when they signed up with a new GMail account.  However, please read the below sub-heading on opening multiple accounts. As Google has added algorithms to detect multiple accounts belonging to the same person or entity.

So, the chances of it working are remote!

What To Do To Avoid Being Banned From AdSense.

Every once in a while we read this message in forums.. Just got “banned from AdSense” .. now what am I supposed to do ??

It makes us wonder what the person did to get banned. It must have been probably one of the following items.
Mentioned below are the top five ways (in no particular order) to get “banned from AdSense”.

Bad – very bad. Google knows and can analyze any click made on your ad units. No matter how you slice it, though, there are definitely people out there who click their own ads, or encourage others to do so, for their own monetary gain. If accidental clicks do happen and you shouldn't panic if you accidentally click an ad on one of your own sites. Just drop a quick note to Google telling them about it and take steps to prevent it from happening again.

Many people never fully read the AdSense terms and conditions, often referred to as the TOS (terms of service). Though the TOS can be vague at times, it is very explicit about various things you can't do.

The AdSense program policies are a technical part of the AdSense terms and conditions, even though they're listed on a separate page. This is where you will find the information about how many link or ad units you can use on a page, what kind of sites are acceptable, etc.

This has become much harder to do since Google has added algorithms to detect multiple accounts belonging to the same person or entity. Each person or entity can ONLY have one account. If you have a legitimate need for two or more accounts, you must create a separate legal entity (like a corporation) for each additional account, and that entity must separately apply and be approved for a new account.

All said and done, play safe and try and report any suspicious matter to Google. In other words, if you notice any of the below activities, report it.

Mentioned below are an additional list of ways that you could avoid, so as to being banned from AdSense.

Please note that Google always takes the “guilty until proven innocent” approach in its dealings with publishers unless you show a pattern of co-operative behavior.

Ignoring Warnings And Questions From Google.

Although certain events cause Google to automatically terminate your account, in most cases, terminations are preceded by a warning note from the AdSense team. This is your chance to defend yourself and to change. If you're not responsive, they'll just go ahead and ban you. (If you're going away for an extended period of time, you should check your mail every day or two and keep an eye on your AdSense earnings as well. Be sure to report any suspicious activity as soon as you see it.)

Is your AdSense Account disabled? Are there any other AdSense Alternatives ?

Yes, there are many.

One of the easiest methods to bring in money into your blog is by selling advertising space. You can also always sell ad space directly, to companies or businesses that are related to your blog topic.

You set a price and advertisers bid for a space. Of course, the first thing you need to do before selling advertising space is to prove that your blog is popular enough to attract readers that can see the ads. One of the best ways to do this and show exactly how popular your site is would be by keeping up with the amount of people that visit your blog.

You should also make sure that you promote your blog in a way that it will rank high in the search engines. This is a vital step in making your blog popular.

You should also try some of the ad networks that are in our post on Google AdSense alternatives.

As a bottom line, just remember the search engine never really needs you, it is always the other way around. So, don't take your frustrations on the obvious.

Also remember, there can always be a small nasty player out there, who can keep clicking on your AdSense ads, which invariably leads to your account being “banned from AdSense.”

Stay SAFE out there!