Social media usage on consumer buying behavior is growing rapidly… For affiliate marketers… social media is an outlet that can potentially be used… to help increase the interest in a product or service.

It is also a known fact that the most defining phenomena of the current times… is the increasing accessibility to the Internet. The product of this is the social media… which comes in many forms. This includes forums, blogs, photo sharing platforms, micro blogs, social gamings.. and most of all social networks.

Over 65% of adults now use social networking sites.. which is close to a tenfold jump from the past decade.

We have taken the liberty of showing you some facts (courtesy – Pew Research Networks).

According to Pew Networks findings.. they say that nearly two-thirds of American adults (65%).. now use social networking sites.. up from 7% when Pew  Research Center began systematically tracking social media usage in 2005. 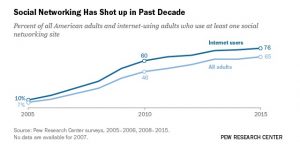 Mentioned below is an overview of changes over time in social media by various demographic groups.

A full archive of Pew Research Center.. reports on different social media platforms such as Facebook, Twitter, Instagram, Pinterest and LinkedIn.. as well as about social media usage on mobile devices in general can be found at Pew Research Networks

Pew Research reports have documented in great detail.. how the rise of social media has affected such things as work, politics.. political deliberation.. communications patterns around the globe.. as well as the way people get and share information about health.. civic life.. news consumption.. communities ..teenage life..parenting.. dating.. and even people’s level of stress.

Social Media Usage During The Past Decade.

The figures reported here are for social media usage among all adults, not just among those Americans who are internet users.

Across demographic groups, a number of trends emerge in this analysis of social media usage..

And moving forward, we’re only going to see even more social media sites popping up in 2016. If you aren’t connected already, you’ll probably be hooked in come 2016.

Gender Demographics..  Women were considered to use social networking sites for a number of years.. although the difference between the males and females since 2014 are fairly small  Today, 68% of all women use social media, compared with 62% of all men.

Racial and ethnic similarities.. There are not notable differences by racial or ethnic group.. 65% of whites, 65% of Hispanics and 56% of African-Americans use social media today. 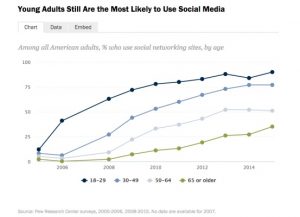 While usage among young adults started to leveled off as early as 2010.. since then there has been a surge in user ship among those 65 and older. In 2005, 2% of seniors used social media, compared with 35% today.

Social Media Usage by Gender.. A Shifting Balance Over Time.

Women and Men Use Social Networking Sites at Comparable Rates.

Starting in 2009.. women started using social media at slightly higher rates than men.. although this balance has shrunk yet again in recent years. Today, 68% of women and 62% of men report social media usage, a difference that is not statistically significant.

Those With Lower Levels of Education Are Less Likely to Use Social Media.

Currently adoption rates for social media stand at 76% for those with college or graduate degrees.. 70% of those with some college education and 54% for those who have a high school diploma or less.

At the same time.. the share of those with a high school diploma or less who use social media has grown more than tenfold over the past decade.

Those in Higher Income Households Lead the Way.

Those differences have persisted even as each group has seen dramatic growth in usage.

When it comes to race and ethnicity, trends in social media adoption are defined by similarities, not differences. Whites, African-Americans and Hispanics have broadly adopted social media at the same brisk pace.

Rural Citizens Have Consistently Lagged Behind..

Which Social Media Sites Do You Use?

There are so many social media sites out there today, some more niche than others.

Which ones have peaked and then dived into obsolescence? Which ones are still relevant? How many social networks do you participate in? Do any of these statistics surprise you?

We would love to hear from you.

Let us know your thoughts about social media usage.